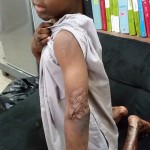 Ibrahim is an 8 year old boy from Cote D’Ivoire who survived a terrible house fire in September 2014 that killed his 10-year old brother and 4-year old sister. This fire was caused by a faulty electrical fuse box. Burns represent a major portion of the workload for the Plastic Surgery and Burns Unit, and 45% of burns patients seen are children. Initially, Ibrahim’s father Adama took him to the local hospital where his burns were dressed. Ibrahim spent 4 painful months in hospital – but did not undergo surgery. As Ibrahim’s burns healed, the scarring caused massive contracture, meaning that as well as suffering pain and itching he was unable to properly straighten his legs, and movement in his legs was severely restricted. Unable to run around like the other children, his future looked bleak.

Adama had heard about the Korle-Bu Teaching hospital in Accra, Ghana from a patient that had been treated there and who had told him that the surgeons there were the best in the region. Wanting the best for his son he decided to take Ibrahim to Ghana, travelling with a friend to help translate as Adama speaks only the local dialect Mandiga and French.   The journey took 11 hours by bus from Adbijan. As the visit was unannounced, Adama and Ibrahim lodged at the hospital whilst the paperwork was put in place for an operation. In July this year, after assessment by the Surgeon and Anaesthetist Ibrahim had his operation and has since started physiotherapy – a much brighter future for this little boy waits!