In 2014 Edem Anyigba returned to Ghana from a year-long surgical fellowship in India, supported by Resurge Africa.

His abilities and outstanding attitude were highly commended by Professor Raja Sabapathy, and he was invited to return this year to attend a major international conference and continue to build ties between the units. 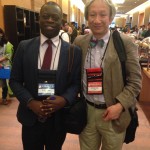 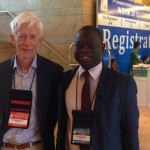 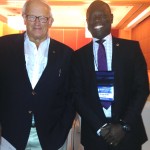 I had the opportunity to interact with many consultants and fellows I had previously met during my stay in Ganga hospital, as well as photo opportunities with giants in the field including Wayne Morrison and Ian Taylor. This meeting offered me the opportunity to see what others are doing, on the flip side.

There were several presentations on the use of flaps without the need for microsurgery and this I find particularly relevant in my setting. An important lesson I also learnt was that, ‘not all new things are the best and also not all old things should discarded’. Another important lasting lesson was also that when people see success, what they don’t see is the persistence, multiple failures, sacrifice, good habits, hard work and dedication that lie beneath the success iceberg.

I would like to thank the Director and Board of Resurge Africa and I would also like to extend my heart-felt gratitude to Dr Sabapathy for an excellent conference and the invitation to attend, and I can assure one and all that this will transform patient management at our Center”.

I arrived in Mumbai on the 19th March.  I attended the opening ceremony later in the evening, and I thoroughly enjoyed the cultural display.  The scientific sessions started on the 20th of March and I elected to attend the master class session on lymphedema, and was priviliged to listen to David Chang a leader in microsurgical management of lymphoedema

The plenary session later in the morning featured leaders in the field who delivered various talks on the theme of the conference: Looking back, surging ahead.   I was particularly inspired by the talks delivered by Scot Levin, Wayne Morrison and Ian Taylor.  Dr Morrison’s talk traced the history of plastic surgery, and recognized the efforts of the pioneers including Dr Gibson of the Canniesburn plastic surgery unit.

Dr Taylors talk on vascular pathways was also particularly fascinating.   The talk detailed the meticulous research they carried out the determining blood supply to the skin.   Later in the day I attended sessions on perforator flaps and the emerging workhorse flaps

On the second day, the session of particular interest was one on microsurgical training and international fellowships, this featured a talk by Dr Sabapathy in which I was mentioned as one of the fellows at Ganga hospital –  it was a proud moment for me.   Other speakers also detailed training opportunities in microsurgery in the various units across the world.
Anand Sharma, who had earlier given a talk on leadership, was available for an interactive session during the lunch break. I attended this session and again picked up some potentially life-changing tips.

Dr Sabapathy again delivered a theme lecture  “Looking back, surging ahead- limb salvage – achieving outcomes worth the effort”.  The lecture was particularly intriguing because it is making a shift towards limb salvage in cases where the limb would have otherwise been amputated. A case in point was a cross hand replant whose follow up shows good function with the prostheses on the other upper limb as a supporting limb

On the last day of the congress the most interesting session was “ my most challenging case” Six accomplished surgeons were given 10 minute slots to present their most challenging cases .  Although some presented multiple cases, this session highlighted the difficulties one will face in his career and the outcomes which depend on the relationship between patient and the surgeon. One striking case was a patient with massive lymphedema with imminent cardiac failure. She had surgery, and 47 kg of diseased tissue removed at surgery.

The last session I attended was on ‘microsurgery in war and mass casualties’ it was an instructive session that also features the use of cutting edge technology to preserve tissue in injured patients.