Burns can be classified according to their mechanism into one of six groups; contact, scalds, electrical, chemical, radiation and fire.  Fire injuries (caused by flash or flame) are most commonly encountered in Ghana, followed by scalds (caused by liquid, steam or grease).  The heat capacity and duration of contact are important determinants in extent of burn damage.  Thus a bystanders response can make a great difference to outcome and the value of public education is evident.

An adequate understanding of skin anatomy is essential to understand the pathophysiology and further descriptive terminology used in assessing burn injuries.  A brief overview is provided here;

The epidermis is composed of stratified epithelium, arranged in  five or three layers, in thick and thin skin respectively.  The stratum basale has rapidly dividing cells, which migrate outwards, losing intracellular components as they do so.  Each layer is defined by certain cell characteristics; the stratum spinosum, granulosum, lucidium and the outermost stratum corneum, which is composed of anucleated cells and provides a watertight barrier preventing both the invasion of microbes and dehydration.

Within these stratified cell layers are specialized epidermal cells, including the pigment producing melanocyte and the Langerhans cells which are dendritic cells with immunological function, similar to macrophages.

The dermis is also of variable thickness in different parts of the body (thickest on the thigh and thinnest on the eyelid) and is composed of two layers.  The upper papillary dermis, containing a thin arrangement of collagen fibres and more cells and the reticular dermis below,  which contains thicker collagen fibres.

Dermal papillae are fingerlike elevations of the papillary dermis into the overlying epidermis (rete pegs).

The dermis is also highly vascular and has a rich nerve fibre network. Specialised Meisseners and Pacini corpuscles are located within the dermis and provide fine touch and pressure sensation.

The subcutaneous tissue is composed of adipose and areolar connective tissue.  This is distributed in various depths and divided by various fascias (e.g. Scarpa’s, Coopers) depending on anatomical location.

Burn wound injury depends on contact time and heat capacity.  There are both local and systemic effects.  Burn depth is important in determining management and outcome.

Superficial or “first degree” burns involve minor damage to the epithelial layer only.  They are red (i.e. dermal blood supply intact), painful (dermal nociceptors intact) and blistering does not occur.  The basal epidermal layer is intact and as such infection and metabolic response tend to be minimal and spontaneous healing will most likely occur.

Deep partial-thickness burns extend into the reticular dermis.  Skin colour is a mixture of red and white, with thick walled blisters, pain and touch sensation is intact.  Spontaneous re-epithelialisation may occur over 3-6 weeks, but infection and hypertrophic scarring are more common.  This is a major problem for people who may not present to hospital as hypertrophic scarring across joints results in restriction of growth and movement.

Full thickness burns destroy the epidermis and dermis, resulting in a painless, white, leathery appearance.  Underlying tissues may be involved and may require debridement before skin grafting or other more complex reconstruction.

During the first day following a full thickness burn injury three concentric areas of pathology are present.  The central zone of coagulation (dead cells, white or charred), which has had maximum heat contact, surrounded by the zone of stasis (initially red and may blanch but its blood supply is precarious) and the outermost zone of hyperaemia (intact circulation, definitely blanches on pressure and generally starts to heal by day 7 following injury).  Good burns management aims at preventing transformation of the zone of stasis into dead zone of coagulation.   Release of histamine, prostaglandins, bradykinin and free radicals (like xanthine oxidase) result in increased permeability of epithelial basement membrane and burn eodema which further contributes to an increased area of the zone of coagulation.

In patients with 30% or more total body surface area (TBSA) burns the widespread release of these inflammatory mediators and cytokines results in a systemic inflammatory response.

Initial management is always Airway, Breathing, Circulation.  In the burns patient any charring around the mouth or nostrils suggest airway damage and early intubation is recommended in any patients showing signs of respiratory compromise (tachypnoea, wheeze, stridor).

The amount of carbon monoxide bound to circulating haemoglobin should be measured and high flow oxygen provided until CO-Hb is less than 10%.

Fluid resuscitation is delineated by the Parkland formula for burns over 20% total body surface area.  The Parkland formula suggests a total volume of 4ml/kg/TBSA to be given over the first 24h following injury, with the first half given in the first 8 hours.  This is, however, only a guide and fluid output and central venous pressure should also inform as to whether you are adequately resuscitating the patient. 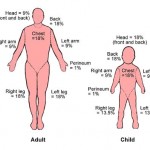 The Galveston formula may be used in paediatric patients, who are more liable to hypoglycaemia due to smaller glycogen stores.  5% dextrose/Hartmanns solution (5000ml per m2 of TBSA burned plus 2000ml), with the first half given within the first eight hours.

Estimation of the percentage total body surface area (TBSA) burned can be calculated using the rule of nines in adults, whereby, the front of the torso represents 18%, as does the back, the whole head is 9%, each anterior leg is 9% and each posterior leg is 9% and each anterior arm is 4.5% and posterior arm 4.5 %, with the genitalia representing the remaining 1%.  A Lund-Browder chart may be used in children.

Ideally patients with significant injuries should be transferred to a specialized burns unit. The American burns association provides details on which patients should be referred and these include:

However, as yet this is not possible in Ghana and many patients struggle to make the journey to one of the few tertiary care centres.

If a burn is circumferential, escharotomies +/- fasciotomies should be considered.  Burns should be cleaned, assessed and dressed in antimicrobial dressings.

A second look and debridement should be undertaken at 48 hours to assess for depth progression.  Full thickness burns and large areas of deep partial thickness require tangential excision and skin grafts.  As mentioned these are performed using a Watsons knife at Korle Bu, an instrument still used by some British surgeons, however, superseded in some centres by electric dermatomes. Local anaesthetic with adrenaline may be injected to reduce blood loss.  Healthy skin is harvested from elsewhere in the body, usually anterolater thigh.  It may be meshed to increase the surface area and reduce the risk of haematoma formation.  Synthetic dermal coverings exist in the UK, however, they are very expensive and as such not currently a feasible option in Ghana.