Buruli ulcer is an infectious, necrotizing skin disease endemic to Ghana, tropical West African countries and to a lesser extent Australia and South America. It takes its name from one of the earliest descriptions in the literature, a series of cases in the Ugandan region of Buruli, near the river Nile.

The responsible organism, Mycobacterium Ulcerans, is an acid-fast mycobacterium of the same genus as the Tuberculus bacilli. It breaches the host’s natural defences and invades the subcutaneous tissue. Children and malnourished adults are particularly vulnerable due to immature or compromised immune system.

The incidence and geographic distribution of disease is not well known. Most cases are in rural populations and many may not present to medical services or present late in the disease course3.

Around four new patients a month undergo operations at the Reconstructive Plastic Surgery and Burns Centre, Korle Bu Hospital, to combat disfigurement and disability caused by buruli. Many people do not consult medical services due to the stigma associated with this ulcerative disease. Within populations where buruli ulcer is endemic the belief that witchcraft and curses are the main causative agents is still strong1. People often hide their ulcer, feeling it represents a previous misdemeanor. There is also a degree of underreporting due to lack of disease recognition by rural health providers. Lack of financial resources and adequate transportation were stated as further deterrents to patients seeking surgical intervention in the city hospital. This is highly frustrating as this is a treatable condition. Early treatment can prevent progression of the disease and the severe long term functional disability which can result. 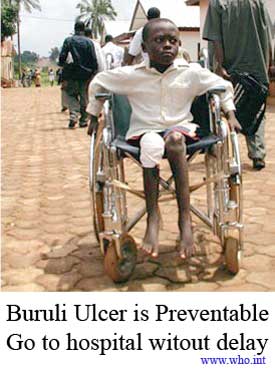 WHO has issued a document aimed at reducing the disability associated with untreated buruli ulcer disease8. It provides information about the disease and encourages all of those involved in the care of people with Buruli Ulcer disease to seek hospitalcare as soon as possible.

Research as to how the organism is acquired and work towards developing a vaccine is ongoing. These intentions are described in detail in the Cotonou declaration on Buruli Ulcer (2009)10, drawn together by health professionals from those countries plagued by BUD alongside other international experts. This provides focus for those working to find a way of eradicating the disability and suffering caused by this preventable disease.

Read some of our patients stories

Read some of our case studies