Kwasi Boakye was 8 years old when he was brought to the Reconstructive Plastic Surgery and Burns Unit in Accra in April 2005. Buruli Ulcer had started near his eye and was progressively destroying his face.It was feared that he would lose his sight.

Kwasi underwent surgery to remove the Buruli lesion and repair the damage that it had caused. He was extremely lucky, his sight was saved. Kwasi was discharged from the hospital in November 2005 following reconstructive surgery.

Buruli ulcer is one of the three most common mycobacterial infections in healthy people, along with tuberculosis and leprosy, and is caused by the same family of bacteria (Mycobacterium ulcerans.) It is the most poorly understood of these three diseases. Most patients are children who live in rural areas near rivers or wetlands. Little is known about how the bacterium is transmitted and there is no known method of prevention.

One important feature of Buruli ulcer is the initial minimally painful nature of the disease which may partly explain why those affected do not seek prompt treatment.

Buruli ulcer destroys skin, underlying tissues and causes deformities. Lesions occur mainly in the limbs but also in the trunk and the eyes. The disease often starts as a painless swelling in the skin. A nodule develops beneath the skin’s surface teeming with mycobacteria. Unlike other mycobacteria, M. ulcerans produces a toxin, which destroys tissue and suppresses the body’s immune system. Massive areas of skin and sometimes bone are destroyed causing gross deformities. When lesions heal, scarring may cause restricted movement of limbs and other permanent disabilities.

Unlike TB there is no known treatment for Buruli ulcer apart from surgery to remove the lesion, followed by skin grafting if necessary. This is both costly and dangerous, leading to the loss of large amount of tissues or permanent disability. Early detection and surgical removal of small lesions could prevent many of its devastating consequences. 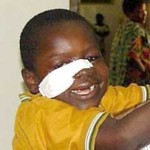 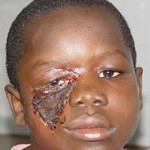