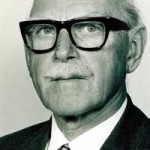 In 1992, renowned Scots surgeon Dr Jack Mustardé, having retired after a full and distinguished medical career at the age of 75, was invited to visit Ghana as advisor to a small medical team. Never one to shy away from an adventure, he accepted – and was utterly shocked by what he found there. “There were lots of congenital deformities, cleft palates, twisted limbs, burns, tropical ulcers – and no plastic surgeons,” he recalled. “There was work to be done.”

With the backing of Ghana’s then-president, JJ Rawlings, Jack and his colleagues began to set up the first reconstructive plastic surgery and burns unit in West Africa in the Korle-Bu Teaching Hospital in Accra, Ghana. The charity that was to become Resurge Africa was born. 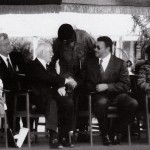 But there was always more to do. It was clear that Ghana needed a dedicated reconstructive surgery hospital. Rawlings offered to pay half the cost of a new 75-bed hospital. “Who is going to build this hospital?” asked Mustardé. “Why, you are,” replied the president.

Jack “begged, borrowed or stole” equipment, raised donations from Scottish businesses, his local church in Alloway, Mrs Evelyn Tay – the Scottish widow of a Ghanaian working as the personal secretary to the Japanese ambassador in Accra – and the Ghanaian and Japanese governments to fund the unit. Eventually, a 75-bed reconstructive plastic surgery and burns unit was established, equipped and officially opened by the president in 1997.

Jack Mustardé’s outstanding efforts changed the face of reconstructive surgery in Ghana and he was decorated by President JJ Rawlings in recognition of his achievements. The formation of the reconstructive surgery service and the building of the unit was very much a cooperative effort between the Ghanaians, without whose enthusiasm and energy nothing would have been accomplished, and the Scottish people, led by Jack.

Read some of our patients stories

Read some of our case studies